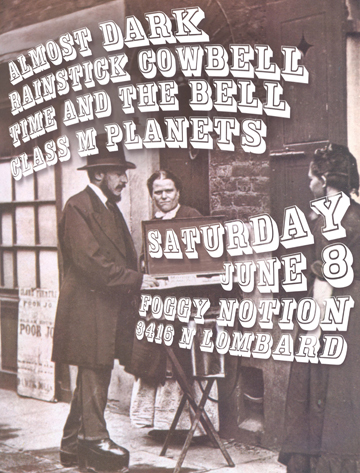 Ahhh, I’ve played with Scott from Rainstick Cowbell several times over the last few years and I’ve known him since his days in Creepy Old Trucks.  He’s quite a performer, AND:  This event is his cd release party.  Rainstick Cowbell the new wave of punk band in a box.   One man with an acoustic guitar who’s always about to go supernova.   His songs are beautiful, though.  Very melodic and definately from a tradition that Elliott Smith came from.  Again, another punk rocker with an acoustic guitar.  Having been the opening act for numerous punk and metal bands as an acoustic performer, I can tell you that the solo mission is greater in its rawness and directness than the loud bombast.  Standing up there all vulnerable is far more bad-ass.  Sorry, that’s just how it is..  Saturday June 8th here in Portland.  Come on down.